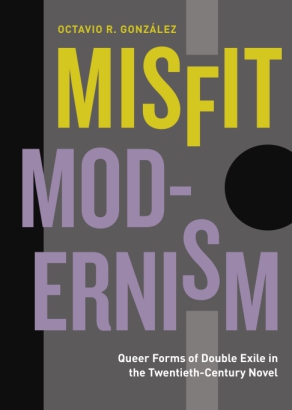 In this book, Octavio R. González revisits the theme of alienation in the twentieth-century novel, identifying an alternative aesthetic centered on the experience of double exile, or marginalization from both majority and home culture. This misfit modernist aesthetic decenters the mainstream narrative of modernism—which explores alienation from a universal and existential perspective—by showing how a group of authors leveraged modernist narrative to explore minoritarian experiences of cultural nonbelonging.

Tying the biography of a particular author to a close reading of one of that author’s major works, González considers in turn Nella Larsen’s Quicksand, Wallace Thurman’s The Blacker the Berry, Jean Rhys’s Quartet, and Christopher Isherwood’s A Single Man. Each of these novels explores conditions of maladjustment within one of three burgeoning cultural movements that sought representation in the greater public sphere: the New Negro movement during the Harlem Renaissance, the 1920s Paris expatriate scene, and the queer expatriate scene in Los Angeles before Stonewall. Using a methodological approach that resists institutional taxonomies of knowledge, González shows that this double exile speaks profoundly through largely autobiographical narratives and that the novels’ protagonists challenge the compromises made by these minoritarian groups out of an urge to assimilate into dominant social norms and values.

Original and innovative, Misfit Modernism is a vital contribution to conversations about modernism in the contexts of sexual identity, nationality, and race. Moving beyond the debates over the intellectual legacies of intersectionality and queer theory, González shows us new ways to think about exclusion.