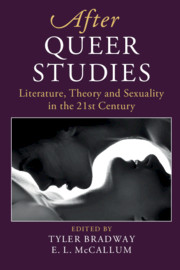 After Queer Studies: Literature, Theory, and Sexuality in the 21st Century

After Queer Studies maps the literary influences that facilitated queer theory's academic emergence and charts the trajectories that continue to shape its continued evolution as a critical practice. It explores the interdisciplinary origins of queer studies and argues for the prominent role that literary studies has played in establishing the concepts, methods, and questions of contemporary queer theory. It shows how queer studies has had an impact on many trending concerns in literary studies, such as the affective turn, the question of the subject, and the significance of social categories like race, class, and sexual differences. Bridging between queer studies' legacies and its horizons, this collection initiates new discussion on the irreducible changes that queer studies has introduced in the concepts, methods, and modes of literary interpretation and cultural practices.