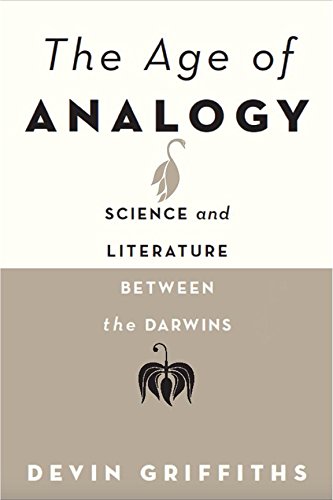 The Age of Analogy: Science and Literature Between the Darwins

Erasmus Darwin and his grandson, Charles, were the two most important evolutionary theorists of eighteenth- and nineteenth-century Britain. Although their ideas and methods differed, both Darwins were prolific and inventive writers: Erasmus composed several epic poems and scientific treatises, while Charles is renowned both for his collected journals (now titled The Voyage of the Beagle) and for his masterpiece, The Origin of Species.

In The Age of Analogy, Devin Griffiths argues that the Darwins’ writing style was profoundly influenced by the poets, novelists, and historians of their era. The Darwins, like other scientists of the time, labored to refashion contemporary literary models into a new mode of narrative analysis that could address the contingent world disclosed by contemporary natural science. By employing vivid language and experimenting with a variety of different genres, these writers gave rise to a new relational study of antiquity, or "comparative historicism," that emerged outside of traditional histories. It flourished instead in literary forms like the realist novel and the elegy, as well as in natural histories that explored the continuity between past and present forms of life. Nurtured by imaginative cross-disciplinary descriptions of the past—from the historical fiction of Sir Walter Scott and George Eliot to the poetry of Alfred Tennyson—this novel understanding of history fashioned new theories of natural transformation, encouraged a fresh investment in social history, and explained our intuition that environment shapes daily life.

Drawing on a wide range of archival evidence and contemporary models of scientific and literary networks, The Age of Analogy explores the critical role analogies play within historical and scientific thinking. Griffiths also presents readers with a new theory of analogy that emphasizes language's power to foster insight into nature and human society. The first comparative treatment of the Darwins’ theories of history and their profound contribution to the study of both natural and human systems, this book will fascinate students and scholars of nineteenth-century British literature and the history of science.