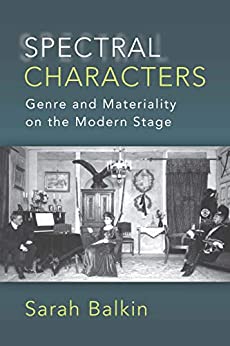 Theater’s materiality and reliance on human actors has traditionally put it at odds with modernist principles of aesthetic autonomy and depersonalization. Spectral Characters argues that modern dramatists in fact emphasized the extent to which humans are fictional, made and changed by costumes, settings, props, and spoken dialogue. Examining work by Ibsen, Wilde, Strindberg, Genet, Kopit, and Beckett, the book takes up the apparent deadness of characters whose selves are made of other people, whose thoughts become exteriorized communication technologies, and whose bodies merge with walls and furniture. The ghostly, vampiric, and telepathic qualities of these characters, Sarah Balkin argues, mark a new relationship between the material and the imaginary in modern theater. By considering characters whose bodies respond to language, whose attempts to realize their individuality collapse into inanimacy, and who sometimes don’t appear at all, the book posits a new genealogy of modernist drama that emphasizes its continuities with nineteenth-century melodrama and realism.