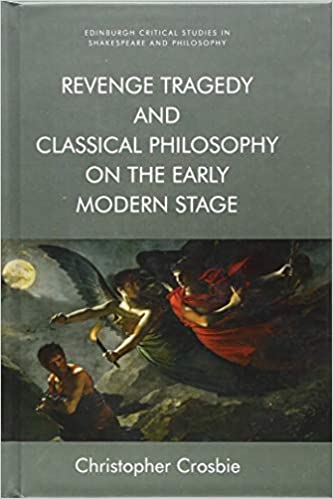 Revenge Tragedy and Classical Philosophy on the Early Modern Stage

This book discovers within early modern revenge tragedy the surprising shaping presence of a wide array of classical philosophies not commonly affiliated with the genre. By recovering the pervasive influence of Aristotelian faculty psychology on The Spanish Tragedy, Aristotelian ethics on Titus Andronicus, Lucretian atomism on Hamlet, Galenic pneumatics on Antonio’s Revenge and Epictetian Stoicism on The Duchess of Malfi, Crosbie reveals how the very atmospheres and ontological assumptions of revenge tragedy exert their own kind of conditioning dramaturgical force. The book also revitalizes our understanding of how the Renaissance stage, even at its most lurid, functions as a unique space for the era’s practical, vernacular engagement with received philosophy.