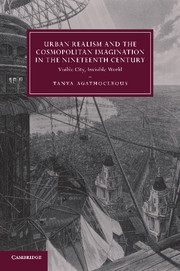 Urban Realism and the Cosmopolitan Imagination

This book tells a story about the transformation of mid-Victorian urban writing in response both to London's growing size and diversity, and Britain's shifting global fortunes. Tanya Agathocleous departs from customary understandings of realism, modernism, and the transition between them, to show how a range of writers throughout the nineteenth century – including William Wordsworth, Charles Dickens, William Morris, Henry James, Arthur Conan Doyle, and Joseph Conrad – explored the ethical, social and political implications of globalization. Showcasing a variety of different genres, Agathocleous uses the lens of cosmopolitan realism – the literary techniques used to transform the city into an image of the world – to explain how texts that seem glaringly dissimilar actually emerged from the same historical concept, and in doing so presents startlingly new ways of thinking about the meaning and effect of cosmopolitanism.