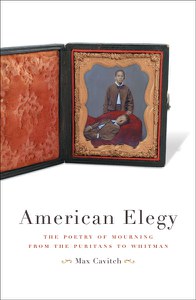 American Elegy: The Poetry of Mourning from the Puritans to Whitman

American Elegy reconnects the study of early American poetry to the broadest currents of literary and cultural criticism. Max Cavitch begins by considering eighteenth-century elegists such as Franklin and Bradstreet. He then turns to elegy's adaptations during the Jacksonian age. Devoting unprecedented attention to the early African American elegy, Cavitch sees in the poems the development of an African American genealogical imagination.