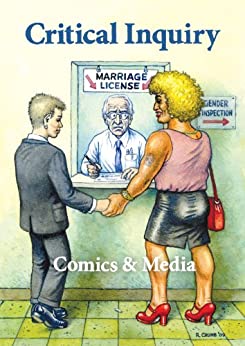 The past decade has seen the medium of comics reach unprecedented heights of critical acclaim and commercial success—and that new prominence has led to increasing interest within the academy as well. Comics and Media, a special issue of the journal Critical Inquiry, reflects that, using the successful Comics: Philosophy and Practice conference held at the University of Chicago in 2012 as a springboard for a larger set of scholarly essays on comics, animation, film, digital games, and media ecologies.

Essays from prominent scholars range across such topics as media archaeology, theories of the image, popular forms, the history of aesthetics, and transmedia dynamics in nineteenth-, twentieth-, and early twenty-first-century contexts, all supported by full-color reproductions of the work of the artists under consideration, including such prominent figures as R. Crumb and Art Spiegelman. Seeking to expand the reach of fields such as media studies and comics studies by seeking out the crossover between different media practices and different disciplines, such as literary theory, art history, film studies, and digital humanities, Comics and Media also highlights the tensions—and connections— between “new” and “old” media throughout.

The most substantial scholarly exploration of comics to date, Comics and Media offers an up-to-date take on a burgeoning field and suggests countless avenues for future inquiry.