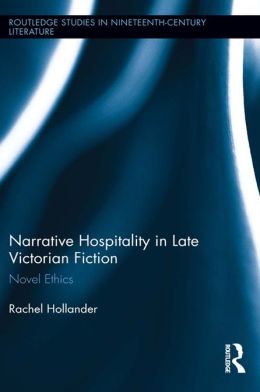 Bringing together poststructuralist ethical theory with late Victorian debates about the morality of literature, this book reconsiders the ways in which novels engender an ethical orientation or response in their readers, explaining how the intersections of nation, family, and form in the late realist English novel produce a new ethics of hospitality. Hollander reads texts that both portray and enact a unique ethical orientation of welcoming the other, a narrative hospitality that combines the Victorians’ commitment to engaging with the real world with a more modern awareness of difference and the limits of knowledge. While classic nineteenth-century realism rests on a sympathy-based model of moral relations, novels by authors such as George Eliot, Thomas Hardy, and Olive Schreiner present instead an ethical recognition of the distance between self and other. Opening themselves to the other in their very structure and narrative form, the visited texts both represent and theorize the ethics of hospitality, anticipating twentieth-century philosophy’s recognition of the limits of sympathy. As colonial conflicts, nationalist anxiety, and the intensification of the "woman question" became dominant cultural concerns in the 1870s and 80s, the problem of self and other, known and unknown, began to saturate and define the representation of home in the English novel. This book argues that in the wake of an erosion of confidence in the ability to understand that which is unlike the self, a moral code founded on sympathy gave way to an ethics of hospitality, in which the concept of home shifts to acknowledge the permeability and vulnerability of not only domestic but also national spaces. Concluding with Virginia Woolf’s reexamination of the novel’s potential to educate the reader in negotiating relations of alterity in a more fully modernist moment, Hollanders suggest that the late Victorian novel embodies a unique and previously unrecognized ethical mode between Victorian realism and a post-World- War-I ethics of modernist form.