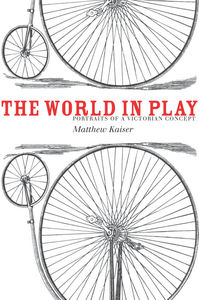 The World in Play: Portraits of a Victorian Concept

Nineteenth-century Britain was a world in play. The Victorians invented the weekend and built hundreds of parks and playgrounds. In the wake of Darwin, they re-imagined nature as a contest for survival. The playful child became a symbol of the future.

A world in play means two things: a world in flux and a world trapped, like Alice in Wonderland, in a ludic microcosm of itself. The book explores the extent to which play (competition, leisure, mischief, luck, festivity, imagination) pervades nineteenth-century literature and culture and forms the foundations of the modern self. Play made the Victorian world cohere and betrayed the illusoriness of that coherence. This is the paradox of modernity. Kaiser gives an account of how certain Victorian misfits—working-class melodramatists of the 1830s, the reclusive Emily Brontë, free spirits Robert Louis Stevenson and John Muir, mischievous Oscar Wilde—struggled to make sense of this new world. In so doing, they discovered the art of modern life.