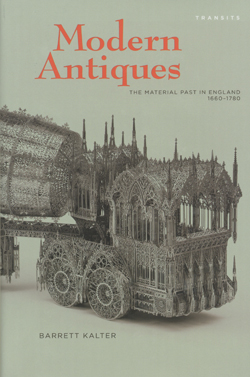 The recovery and reinvention of the past were fundamental to the conception of the modern in England during the long eighteenth century. Scholars then forged connections between linear time and empirical evidence that transformed historical consciousness. Chronologers, textual critics, and antiquaries constructed the notion of a material past, which spread through the cultures of print and consumption to a broader public, offering powerful--and for that reason, contested--ways of perceiving temporality and change, the historicity of objects, and the relation between fact and the imagination. But even as these innovative ideas won acceptance, they also generated rival forms of historical meaning. The regular procession of chronological time accentuated the deviance of anachronism and ephemerality, while the opposition of unique artifacts to ubiquitous commodities exoticized things that straddled this divide.

Inspired by the authentic products as well as the anomalous by-products of contemporary scholarship, writers, craftsmen, and shoppers appropriated the past to create nostalgic and ironic alternatives to their own moment. Barrett Kalter explores the history of these "modern antiques," including Dryden's translation of Virgil, modernizations of The Canterbury Tales, Gray's Gothic wallpaper, and Walpole's Strawberry Hill. Though grounded in the ancient and medieval eras, these works uncannily addressed the controversies about monarchy, nationhood, commerce, and specialized knowledge that defined the present for the English eighteenth century. Bringing together literary criticism, historiography, material culture studies, and book history, Kalter argues that the proliferation of modern antiques in this period reveals modernity's paradoxical emergence out of encounters with the past.