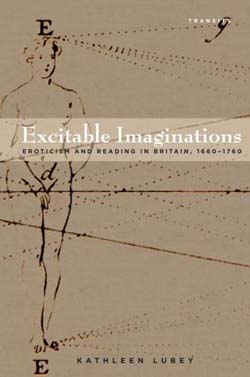 Excitable Imaginations offers a new approach to the history of pornography. Looking beyond a counter-canon of bawdy literature, Kathleen Lubey identifies a vigilant attentiveness to sex across a wide spectrum of literary and philosophical texts in eighteenth-century Britain. Esteemed public modes of writing such as nationalist poetry, moral fiction, and empirical philosophy, as well as scandalous and obscene writing, persistently narrate erotic experiences - desire, voyeurism, seduction, orgasm. The recurring turn to sexuality in literature and philosophy, she argues, allowed authors to recommend with great urgency how the risqué delights of reading might excite the imagination to ever greater degrees of educability on moral and aesthetic matters. Moralists such as Samuel Richardson and Adam Smith, like their licentious counterparts Rochester, Haywood, and Cleland, purposefully evoke salacious fantasy so that their audiences will recognize reading as an intellectual act that is premised on visceral pleasure. Eroticism in texts like Pamela and Memoirs of a Woman of Pleasure, in Lubey's reading, did not compete with instructive literary aims, but rather was essential to the construction of the self-governing Enlightenment subject.