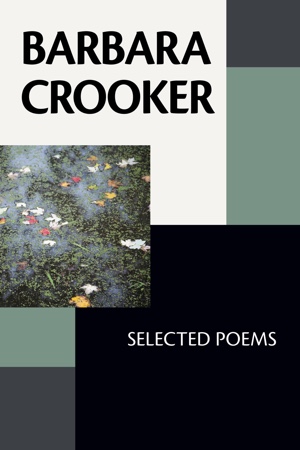 This collection brings together 102 poems from Barbara Crooker’s previous ten chapbooks of poetry, two of which won national prizes, with a handful of uncollected poems at the end.

Of Crooker’s work, William Matthews has written, “Barbara Crooker’s poems have been written with a deft touch and with that affection for their textures and pacings that we’re accustomed to call, a little dryly, ‘technical skill.’ It’s a form of love, actually, and since she’s expended it on her poems, we can, too.” Janet McCann, writing in the Foreword, says, “The poems in this collection come mostly from chapbooks, collections which cluster around a theme, such as loss of a parent or friend, raising a child with autism, travel, art. Crooker’s collections are remarkable for their unity; their poems, epigraphs, even covers have a thematic thrust that collects and directs the work, making each a coherent work of art.... Reading the work from beginning to end provides an experience of Crooker’s world, that place of work and sadness balanced by art and love. It also provides vignettes of growing up in the fifties and sixties and shows what it was like to come of age as a woman in those years—the expectations, the hopes, the barriers that had to be overcome. Even in poems of loss, the energy persists, giving us the sense that Crooker is truly in the current of life, feeling its verve—what Wallace Stevens called ‘the intensity of love’ that he identified with ‘the verve of earth.’”