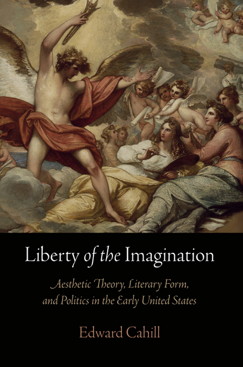 Liberty of the Imagination

In Liberty of the Imagination, Edward Cahill uncovers the surprisingly powerful impact of eighteenth-century theories of the imagination—philosophical ideas about aesthetic pleasure, taste, genius, the beautiful, and the sublime—on American writing from the Revolutionary era to the early nineteenth century. Far from being too busy with politics and commerce or too anxious about the morality of pleasure, American writers consistently turned to ideas of the imagination in order to comprehend natural and artistic objects, social formations, and political institutions. Cahill argues that conceptual tensions within aesthetic theory rendered it an evocative language for describing the challenges of American political liberty and confronting the many contradictions of nation formation. His analyses reveal the centrality of aesthetics to key political debates during the colonial crisis, the Revolution, Constitutional ratification, and the advent of Jeffersonian democracy.

Exploring the relevance of aesthetic ideas to a range of literary genres—poetry, novels, political writing, natural history writing, and literary criticism—Cahill makes illuminating connections between intellectual and political history and the idiosyncratic formal tendencies of early national texts. In doing so, Liberty of the Imagination manifests the linguistic and intellectual richness of an underappreciated literary tradition and offers an original account of the continuity between Revolutionary writing and nineteenth-century literary romanticism.