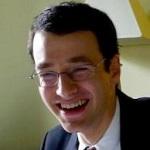 Andrew Goldstone specializes in twentieth-century literature in English. His research and teaching interests span modernist and non-modernist writing of the last century, literary theory, the sociology of literature, and the digital humanities. Before coming to Rutgers, he taught at Yale (where he received his doctorate in 2009), Stanford, NYU, and The New School. Goldstone's book, Fictions of Autonomy: Modernism from Wilde to de Man (Oxford University Press, 2013), shows how modernists' many attempts to make literature a law unto itself devised distinctive modes of relation between literary works and their social world. Goldstone is working on a book about the system of genre fiction, tentatively titled "Wastes of Time: Genre and the Literary Field since 1890."