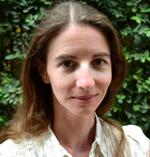 Abigail Zitin studies British writers, artists, and critics of the eighteenth century; she comes to Rutgers after having taught at Trinity University in San Antonio. Her current project investigates when and how the term form became meaningful as an attribute of verbal artworks, taking as its central focus William Hogarth’s 1753 treatise The Analysis of Beauty. Hogarth articulates a theory of aesthetic pleasure grounded in visual experience, which gives rise to the following questions: were its conclusions supposed to apply to products of the human imagination composed in language? How might literary texts have eluded the purview of a term as apparently fundamental as form? Corollary areas of interest include aesthetics and gender, both in and beyond Hogarth’s Analysis, and the cultural history of addiction as a framework for thinking about agency, psychology, and the rise of the novel.