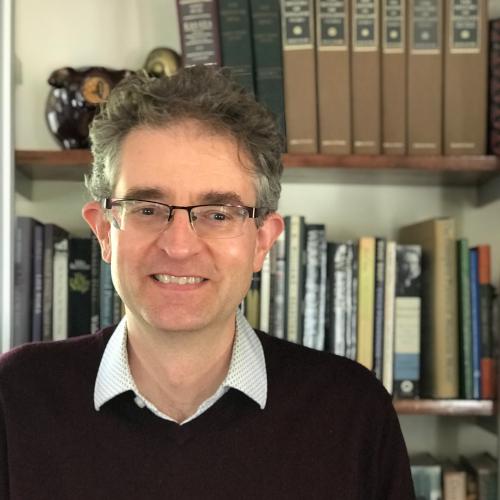 I was trained as a Romanticist and received my PhD in 2000.  Romanticism has always interested me less as a historical period than as a set of conceptual and theoretical problems (involving subjectvity, language, secularization, ontology, and political agency) that sometimes find purchase in other periods or styles.  I continue to write and teach about Romantic literature, politics, and culture, at both the graduate and undergraduate levels.  I have also published quite a bit in the burgeoning fields of secular and post-secular studies, and in the field of Religion and Literature.  Finally, I have a long-standing interest in cognitive science, particularly theories of consciousness, and in the history of philosophy more generally.   I have published on all of these topics  in The Wordsworth Circle, Qui Parle, ELH, Studies in Romanticism, Pedagogy, Romantic Circles Praxis, Public Culture, MLQ, and elsewhere.  In 2017-2018 I was Interim Chair of the Department of English; in fall of 2018 I was also the Leverhulme Visiting Professor of English at Lancaster University, England.  Since 2019 I have been the Director of the Center for Cultural Analysis at Rutgers, which is an interdisciplinary humanities center that supports a series of lectures, workshops, seminars, and working groups.  I am the author of two monographs: The Book of God: Secularization and Design in the Romantic Era (2007), and Unquiet Things: Secularism in the Romantic Age (2015), both published by the University of Pennsylvania Press. The first studies the ubiquitous presence of the argument from design in the eighteenth and early nineteenth centuries, arguing that its cultural and aesthetic importance undermines the familiar equation of modernization with secularization. The second emphasizes secularism rather than religion as its primary analytic category, and proposes that romantic-era literary writing possesses a distinctive ability to register the discontents that characterize the mood of secular modernity.

I am currently working on two separate book-length projects.  The first, provisionally titled On Not Being Reconciled, is a study of literature and religion, with particular reference to Adorno and Kierkegaard.  The second is a book on the political possibilities of Romanticism, provisionally entitled Careless Steps.

The Book of God: Secularization and Design in the Romantic Era (University of Pennsylvania Press, 2007)