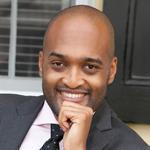 Douglas Jones' research and courses treat (African) American literatures of the eighteenth and nineteenth centuries, drama and performance studies, and cultural histories of slavery in British North America and the US. He is currently working on two monographs. "Pragmatics of Democracy: A Political Theory of African American Literature Before Emancipation" explores early black writers' contributions to democratic theory. An essay from that research, "Slave Evangelicalism, Shouting, and the Beginning of African American Writing," appears in Early American Literature and another is forthcoming in American Literary History (2021). The other book project is "The Black Below: Minstrelsy, Literature, and Modern Grime," a study of nineneeth-century black minstrelsy and the ways it shaped African American literary modernism. An essay from that research, "The Black Below: Minstrelsy, Satire, and the Threat of Vernacularity," was recently published in Theatre Journal (2021). He is also preparing an edition of political philosopher Maria Stewart's writings for Oxford New Histories of Philosophy (OUP).

Professor Jones is the author of The Captive Stage: Performance and the Proslavery Imagination of the Antebellum North (Michigan 2014); co-editor of the essay collection Race and Performance after Repetition (Duke 2020); editor of the special issue of Modern Drama 62.4 "Slavery's Reinventions" (Winter 2019); and co-editor of The Methuen Drama Book of Post-Black Plays (Bloomsbery 2013). Race and Performance after Repetition won the 2021 Errol Hill Award from the American Society for Theatre Research for best book in black theatre and performance studies. His essays have appeared or are forthcoming in American Literary History, Theatre Journal, J19: The Journal of Nineteenth-Century Americanists, Early American Literature, and TDR, among other journals and anthologies.

Professor Jones sits on the editorial board of Modern Drama. At Rutgers, he is faculty director of the certificate in Drama and Performance Studies and coordinates the Seminar on Literature and Political Theory in the Center for Cultural Analysis. He is on faculty at the Bread Loaf School of English, where he has held the Frank and Eleanor Griffiths Chair, and is a former fellow of the Princeton Society of Fellows.

Outside the academy, Professor Jones' research has recently been featured in The New York Times and he appears in the PBS American Experience documentary on L. Frank Baum's The Wonderful Wizard of Oz and its legacies.