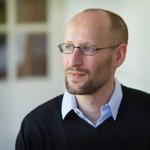 David Orr has served as the poetry columnist for The New York Times Book Review since 2005. In addition to editing the Penguin Classics Deluxe edition of Robert Frost’s early poetry, Professor Orr is the author of The Road Not Taken: Finding America in the Poem Everyone Loves and Almost Everyone Gets Wrong, as well as Beautiful & Pointless: A Guide to Modern Poetry, which was named one of the twenty best books of 2011 by the Chicago Tribune. He is the recipient of the Nona Balakian Citation for Excellence in Reviewing from the National Book Critics Circle and the Editor’s Prize for Reviewing from Poetry magazine.