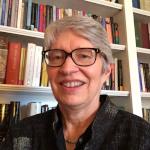 Professor Bartels is author of Speaking of the Moor: From Alcazar to Othello (2008) and Spectacles of Strangeness: Imperialism, Alienation, and Marlowe (1993), which won the Roma Gill Prize for Best Work on Christopher Marlowe, 1993-94.  She is co-editor, with Emma Smith (University of Oxford), of Christopher Marlowe in Context (2013) and editor of Critical Essays on Christopher Marlowe (1997). Her most recent essays include: “Strange Bedfellows: The Ordinary Undersides of ‘A True Reportory’ and The Tempest,” “Identifying ‘the Dane’: Gender and Race in Hamlet” (2016); and “Julius Caesar: Making history” (2016).

Professor Bartels's graduate and undergraduate courses have centered on early modern literature and culture, with a focus on Shakespearean and non-Shakespearean drama. She is especially interested in questions of race, cross-cultural relations, gender, genre, and performance.

Professor Bartels has received the Board of Trustees Fellowship for Scholarly Excellence (1993), the School of Arts and Sciences Award for Distinguished Contributors to Undergraduate Education (2008 & 1993), and the Warren I. Susman Award for Excellence in Teaching (2008) from Rutgers University. She has also been the recipient of a Solmsen Fellowship at the Institute of Research in the Humanities, at the University of Wisconsin (1995); and a Black Atlantic Project fellowship from the Rutgers Center for Historical Analysis. Since 2010 she has been the director, and is now dean, of the Middlebury Bread Loaf School of English, a summer Master’s program designed for K-12 English and language arts teachers.