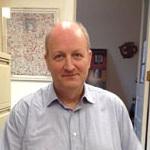 Professor Scanlon is the author of Narrative, Authority, and Power: The Medieval Exemplum and the Chaucerian Tradition (1994).  He is the editor of The Cambridge Companion to Medieval Literature, 1100-1500 (2009), and co-editor of John Lydgate: Poetry, Culture, and Lancastrian England (with James Simpson, 2005).  He has published numerous essays on Middle English, Old French, Medieval Latin texts and traditions.  He has also published on medievalism, and American and African-American Literature.  He is currently completing a lengthy study on homoeroticism in later medieval literature and culture. Its tentative title is At Sodom's Gate: The Sin Against Nature from Plato to John Lydgate.  He is also co-editing (with Susan Nakley) an anthology of essays entitled Barbarous Tongues that focuses on problem of race, religious alterity, and Christian, Muslim, and Jewish relations in later medieval culture.