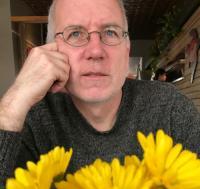 Professor Dienst is the author of:

— The Bonds of Debt: Borrowing Against the Common Good (Verso Books, 2011), an analysis of indebtedness as a fundamental condition of contemporary social, political, and economic life.

— Seeing from Scratch: 15 Lessons with Godard (Caboose Books, 2020), an exploration of visual pedagogy based on the work of Jean-Luc Godard.

He is also the co-editor (with Henry Schwarz) of Reading the Shape of the World: Toward an International Cultural Studies (Westview Press, 1996), a collection of essays on cultural politics in an era of globalization.

He has published a series of essays on contemporary theory, visual media, and political discourse in a variety of journal and anthologies.

2020: Warren I. Susman Award for Excellence in Teaching