Poetic License: Authority and Authorship in Medieval and Renaissance Contexts 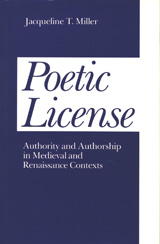 This study investigates the sometimes complementary, sometimes conflicting concepts of literary authority and authorship, and the forces that work either to merge or separate them in several medieval and Renaissance contexts. Arguing that the idea of authorial authority is a central artistic concern in these periods. Poetic License explores the various practical techniques and the oretical considerations by which writers mediate between the related demands of creative autonomy and those of authoritative sanction, examining the formative influence of the tensions that result. Professor Miller's study proceeds from a dual perspective, focusing both on individual writers and on the poetic forms popular in these periods. In particular, she examines the problem of authority in the medieval dream-vision, in allegory, and in the Renaissance sonnet cycle and the related concept of imitation, taking as major examples Chaucer's House of Fame, Spenser's Faerie Queene, and the sonnet sequences of Sidney and Spenser.