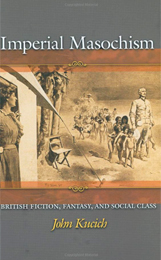 Drawing on recent psychoanalytic theory to define masochism in terms of narcissistic fantasies of omnipotence rather than sexual perversion, the book illuminates how masochism mediates political thought of many different kinds, not simply those that represent the social order as an opposition of mastery and submission, or an eroticized drama of power differentials. Masochism was a powerful psychosocial language that enabled colonial writers to articulate judgments about imperialism and class.

The first full-length study of masochism in British colonial fiction, Imperial Masochism puts forth new readings of this literature and shows the continued relevance of psychoanalysis to historicist studies of literature and culture.