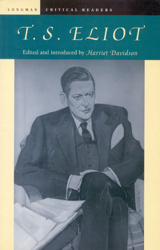 One of the most influential poets of the twentieth century, T. S. Eliot is generally regarded as a leading exponent of the literary movement which came to be known as Modernism. In this volume, Harriet Davidson collects key recent essays by such internationally renowned critics as Terry Eagleton, Sandra Gilbert, Jacqueline Rose, Jeffrey Perl, Christine Froula, Maud Ellmann, and Michael North, placing Eliot's work centrally in the context of postmodern critical theory.

Eliot's writing is often perceived as incompatible with or resistant to new theoretical approaches, but this volume demonstrates the continuity between Eliot's own theoretical writings and contemporary theory, and illuminates his poetry with imaginative readings from deconstructive, Marxist, psychoanalytic, and feminist perspectives. Head notes to the essays and a bibliography which lists other informative readings make this book an invaluable guide to all students of twentieth century poetry, and to scholars interested in the relationship between critical and creative writing.