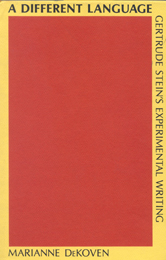 Like the products of the "sea-change" in Ariel's song in The Tempest, modernist writing is "rich and strange." Its greatness lies in its density and its dislocations, which have until now been viewed as a repudiation of and an alternative to the cultural implications of turn-of-the-century political radicalism. Professor Marianne DeKoven argues powerfully to the contrary, maintaining that modernist form evolved precisely as a means of representing the terrifying appeal of movements such as socialism and feminism.

Organized around pairs and groups of female- and male-signed texts, the book reveals the gender-inflected ambivalence of modernist writers. Male modernists, desiring utter change, nevertheless feared the loss of hegemony it might entail, while female modernists feared punishment for desiring such change. With water imagery as a focus throughout, Professor DeKoven provides extensive new readings of canonical modernist texts and of works in the feminist and African-American canons not previously considered modernist. Building on insights of Luce Irigaray, Klaus Theweleit, and Jacques Derrida, she finds in modernism a paradigm of unresolved contradiction that enacts in the realm of form an alternative to patriarchal gender relations. 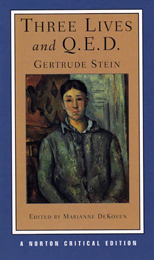 This Norton Critical Edition includes both Three Lives and Q.E.D., first published in 1909 and 1950, respectively. Three Lives is comprised of the stories, "The Good Anna," "Melanchtha," and "The Gentle Lena." "Melanchtha" is an adaptation of Q.E.D., Stein's first completed novel, which remained unpublished until four years after her death.

"Contexts" is divided into the two sections, "Biography" and "Intellectual Backgrounds," which highlight the inspirations for and evolutions of Three Lives, and which discuss the difficult reception Stein's experimental writing met with in the publishing world.

"Criticism" collects 19 chronologically arranged essays on Stein's life and work, from pieces written during the decades in which her work was regarded as important primarily for its influence on writers such as Ernest Hemingway and Sherwood Anderson to the more laudatory scholarship of recent years. Feminism and form, queer studies, interrelations of race and sexuality, African American studies, and primitivism and eugenics are all represented. Among the critical pieces are William Carlos Williams's commentary on Stein's complexity and originality, Richard Bridgman's study of Stein's work as a possible compensation and camouflage for her lesbianism, and Lisa Ruddick's essay connecting feminist analysis to theories of consciousness.

Utopia Limited: The Sixties and the Emergence of the Postmodern 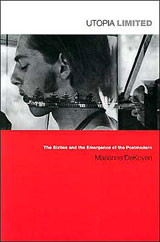 Professor DeKoven describes the Sixties as the dividing line between modernism and postmodernism. She considers the "long Sixties" (from the late Fifties to the early Seventies) as dominantly modern, with postmodernism as the emergent culture pivoting on feminism, the Civil Rights Movement, and the politics of subjectivity. To reveal the newfound appreciation for popular culture as distinct from high culture and the avant-garde, Professor DeKoven discusses figures like Roland Barthes, Tom Wolfe, Hunter Thompson, and philosopher Herbert Marcuse, whom Professor DeKoven describes as having modern ideas (revolution, dualism, absolute) while showing traits of the postmodern (working from within, partial, relative). Toni Morrison's Beloved and E.L. Doctorow's The Waterworks are examined as representative postmodern ideas of utopia. The chapter on Vietnam, in which the author discusses Frances Fitzgerald's Fire in the Lake, provides a good overview of that book's themes as well as the general spirit of the Sixties.