Oliver Wendell Holmes in Paris: Medicine, Theology, and The Autocrat of the Breakfast Table 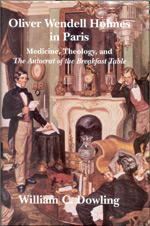 Oliver Wendell Holmes Sr.'s Breakfast Table Trilogy was a series of extremely popular essays published in The Atlantic Monthly from its first issue in 1857 to 1870. Speaking to the cultural and religious concerns of the period, these essays made Holmes famous on both sides of the Atlantic.

Professor William C. Dowling brings together literary criticism, philosophy, and the history of science to re-examine the Breakfast Table Trilogy through the lens of what Holmes learned as a medical student in Paris in the 1830s—during the Paris revolution in clinical teaching that laid the foundations of modern medicine. There, the young Holmes gained the experience that would eventually manifest so richly in the Breakfast Table Trilogy, which Dowling argues was the major American contribution to the literature of Victorian religious anxiety, keeping company with the works of Tennyson and Carlyle.

Though based on the uncompromising philosophical materialism of such works as La Mettrie's L'Homme machine, his experiences in Paris would ultimately suggest to Holmes an alternative view of the bleak physical universe brought into view by Lyell's Principles of Geology and Darwin's Origin of Species. In the Breakfast Table Trilogy, as well as in the writings he produced during his career at Harvard Medical School, Holmes would argue that science, as much as art, music, or literature, was the creation of a human consciousness existing outside or beyond purely physical laws. Holmes's metaphysics of consciousness, Professor Dowling maintains, accounts for his enormous impact on readers on both sides of the Atlantic during the later nineteenth century. In his medical studies lie the hidden origins of that religio medici, or "physician's religion," that would subsequently permit Holmes, in the pages of The Atlantic Monthly, to emerge as spiritual physician to an age of religious doubt.