The Contested Castle: Gothic Novels and the Subversion of Domestic Ideology 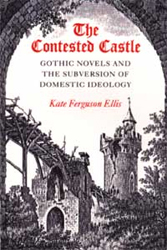 The Gothic novel emerged out of the Romantic mist alongside a new conception of the home as a separate sphere for women. Looking at novels from Horace Walpole's Castle of Otranto to Mary Shelley'sFrankenstein, Professor Ellis investigates the relationship between these two phenomena of middle-class culture—the idealization of the home and the popularity of the Gothic—and explores how both male and female authors used the Gothic novel to challenge the false claim of home as a safe, protected place. Linking terror—the most important ingredient of the Gothic novel—to acts of transgression, Professor Ellis shows how houses in Gothic fiction imprison those inside them, while those locked outside wander the earth plotting their return and their revenge.