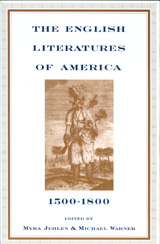 The English Literatures of America redefines colonial American literatures, sweeping from Newfoundland and Nova Scotia to the West Indies and Guiana. The book begins with the first colonization of the Americas and stretches beyond the Revolution to the early national period. Many texts are collected here for the first time; others are recognized masterpieces of the canon--both British and American--that can now be read in their Atlantic context. By emphasizing the culture of empire and by representing a transatlantic dialogue, The English Literatures of America allows a new way to understand colonial literature both in the United States and abroad.