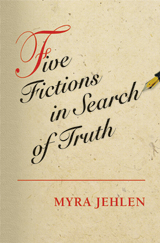 Fiction, far from being the opposite of truth, is wholly bent on finding it out, and writing novels is a way to know the real world as objectively as possible. In Five Fictions in Search of Truth, Professor Myra Jehlen develops this idea through readings of works by Flaubert, James, and Nabokov. She invokes Proust's famous search for lost memory as the exemplary literary process, which strives, whatever its materials, for a true knowledge. In Salammbô, Flaubert digs up Carthage; in The Ambassadors, James plumbs the examined life and touches at its limits; while in Lolita, Nabokov traces a search for truth that becomes a trespass.

In these readings, form and style emerge as fiction's means for taking hold of reality, which is to say that they are as epistemological as they are aesthetic, each one emerging by way of the other. The aesthetic aspects of a literary work are just so many instruments for exploring a subject, and the beauty and pleasure of a work confirm the validity of its account of the world. For Flaubert, famously, a beautiful sentence was proven true by its beauty. James and Nabokov wrote on the same assumption--that form and style were at once the origin and the confirmation of a work's truth.

In Five Fictions in Search of Truth, Professor Jehlen shows, moreover, that fiction's findings are not only about the world but immanent within it. Literature works concretely, through this form, that style, this image, that word, seeking a truth that is equally concrete. Writers write--and readers read--to discover an incarnate, secular knowledge, and in doing so they enact a basic concurrence between literature and science.