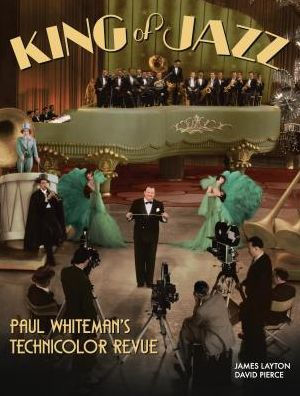 King of Jazz: Paul Whiteman's Technicolor Revue tells the story of the making, release, and restoration of Universal's 1930 Technicolor musical extravaganza King of Jazz. Authors James Layton and David Pierce have uncovered original artwork, studio production files, behind-the-scenes photographs, personal papers, unpublished interviews, and a host of other previously unseen documentation. The book offers a richly illustrated narrative of the film's production, with broader context on its diverse musical and theatrical influences. The story concludes with an in-depth look at the challenges Universal overcame in restoring the film in 2016. Additionally, the book's appendix provides a comprehensive guide to all of the film's performers, music, alternate versions, and deleted scenes.

King of Jazz was one of the most ambitious films ever to emerge from Hollywood. Just as movie musicals were being invented in 1929, Universal Pictures brought together Paul Whiteman, leader of the country's top dance orchestra; John Murray Anderson, director of spectacular Broadway revues; a top ensemble of dancers and singers; early Technicolor; and a near unlimited budget.

The film's highlights include a dazzling interpretation of George Gershwin's Rhapsody in Blue, which Whiteman had introduced to the public in 1924; Walter Lantz's A Fable in Jazz, the first cartoon in Technicolor; and Anderson's grand finale The Melting Pot of Music, a visualization of popular music's many influences and styles.

The film is not only a unique document of Anderson's theatrical vision and Whiteman's band at its peak, but also of several of America's leading performers of the late 1920s, including Bing Crosby in his first screen appearance, and the Russell Markert Dancers, who would soon become Radio City Music Hall's famous Rockettes.