An Evening's Entertainment: The Age of the Silent Feature Picture 1915-1928 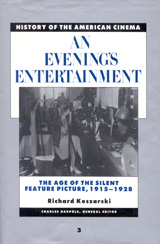 The silent cinema was America's first modern entertainment industry, a complex social, cultural, and technological phenomenon that swept the country in the early years of the twentieth century. Audiences in the lavish new movie palaces were thrilled by such landmark films as The Birth of a Nation, The Gold Rush, and Nanook of the North, and soon they were eagerly following the on- and off-screen activities of a host of glamorous media celebrities.  But there is more to this story than glamour and glitz.  Professor Koszarski examines the underlying structures that made the silent-movie era work, from the operations of eastern bankers to the problems of neighborhood theater musician. He offers a new perspective on the development of a major industry and art form and provides a revealing new context for the creative contributions of such screen icons as D. W. Griffith, Cecil B. DeMille, Erich von Stroheim, Gloria Swanson, Rudolph Valentino, and Mary Pickford.