Stealing the Language: The Emergence of Women's Poetry in America

Stealing the Language: The Emergence of Women's Poetry in America

For The Love Of God

For The Love Of God 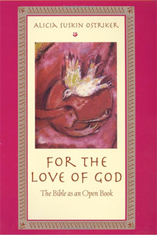 A long-prominent poet and feminist critic (Stealing the Language), Professor Alicia Ostriker further plumbs subjects of previous work: sectarian violence, urban geography, family history, easel painting and Jewish identity. If Professor Ostriker sacrifices verbal nuance for moral clarity, she nonetheless makes her persona and views appealingly present on every page. Clean, unambiguous lines (reminiscent of Robert Pinsky's) present her speaker as an explainer, a bringer of news: "Sometimes I feel like a mailman who faithfully visits each door in his district,/ Sometimes like a mermaid out of water." Ambivalent poems about New York, Jerusalem and Berlin praise "days when to walk a city/ is like feeling completely healed." A group of poems responds to major works of Eastern and Western painting and classical music, like Botticelli's, Mozart's and Bonnard's "mysteries of domestic/ Life in the modern void." Professor Ostriker has achieved recent prominence with nonfiction devoted to Jewish experience, and she ends with an emphasis there; a final set of ambitious longer poems juxtaposes a history of suffering, recent events in Israel, the Iraq war and the travails of the poet's mother. "Where did she go, my hopeful young mother/ My mother who promised we would overcome/ The bosses and bigots?" Professor Ostriker concludes: "I want her// To come back and try again."

Dancing at the Devil's Party