The Return of the Visible in British Romanticism 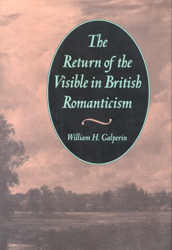 In this path-breaking study Professor William Galperin offers a major revisionist reading of Romanticism that emphasizes the visible - as opposed to visionary - impulse in British Romantic poetry and prose. Employing a wide variety of theoretical insights, Galperin shows not only that the visual impulse is central to an understanding of Romanticism but also that the Romantic preoccupation with the "world seen" forms an integral part of the prehistory of cinema. Professor Galperin challenges the assumption that a single philosophy characterized the art and culture of high Romanticism. Instead, he argues, the culture of the period - both high and low - was a site of competing ideas. From the poetry of Wordsworth and Byron to the painting of John Constable and Caspar David Friedrich to the precinematic institutions of the panorama and the diorama, The Return of the Visible in British Romanticism lends new vigor to ongoing debates about the nature of Romanticism lends new vigor to ongoing debates about the nature of Romanticism, nineteenth-century culture, and the origins of cinema.