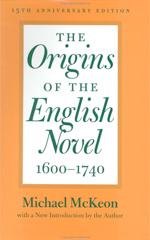 In this book, Professor Michael McKeon combines historical analysis and readings of extraordinarily diverse texts to reconceive the foundations of the dominant genre of the modern era. Challenging prevailing theories that tie the origins of the novel to the ascendancy of "realism" and the "middle class," Professor McKeon argues that this new genre arose in response to the profound instability of literary and social categories. Between 1600 and 1740, momentous changes took place in European attitudes toward truth in narrative and toward virtue in the individual and the social order. The novel emerged, he contends, as a cultural instrument designed to engage the epistemological and social crises of the age.

The Fifteenth Anniversary Edition of The Origins of the English Novel features a new introduction in which Professor McKeon reflects on the considerable response and commentary the book has attracted since its publication by describing dialectical method and by applying it to early modern notions of gender.