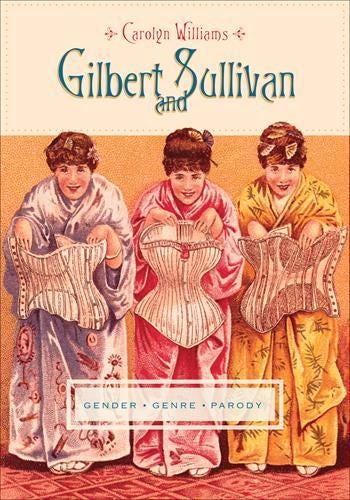 Long before the satirical comedy of The Daily Show and The Colbert Report, the comic operas of W. S. Gilbert and Arthur Sullivan were the hottest send-ups of the day's political and cultural obsessions. Gilbert and Sullivan's productions always rose to the level of social commentary, despite being impertinent, absurd, or inane. Some viewers may take them straight, but what looks like sexism or stereotype was actually a clever strategy of critique. Parody was a powerful weapon in the culture wars of late-nineteenth-century England, and with defiantly in-your-face sophistication, Gilbert and Sullivan proved that popular culture can be intellectually as well as politically challenging.

Carolyn Williams underscores Gilbert and Sullivan's creative and acute understanding of cultural formations. Her unique perspective shows how anxiety drives the troubled mind in the Lord Chancellor's "Nightmare Song" in Iolanthe and is vividly realized in the sexual and economic phrasing of the song's patter lyrics. The modern body appears automated and performative in the "Junction Song" in Thespis, anticipating Charlie Chaplin's factory worker in Modern Times. Williams also illuminates the use of magic in The Sorcerer, the parody of nautical melodrama in H.M.S. Pinafore, the ridicule of Victorian aesthetic and idyllic poetry in Patience, the autoethnography of The Mikado, the role of gender in Trial by Jury, and the theme of illegitimacy in The Pirates of Penzance. With her provocative reinterpretation of these artists and their work, Williams recasts our understanding of creativity in the late nineteenth century.