The Cambridge Companion to English Melodrama 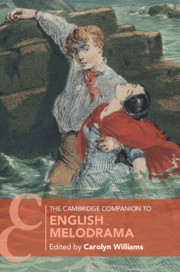 This newly commissioned series of essays by leading scholars is the first volume to offer both an overview of the field and also current emerging critical views on the history, form, and influence of English melodrama. Authoritative voices provide an introduction to melodrama's early formal features such as tableaux and music, and trace the development of the genre in the nineteenth century through the texts and performances of its various sub-genres, the theatres within which the plays were performed, and the audiences who watched them. The historical contexts of melodrama are considered through essays on topics including contemporary politics, class, gender, race, and empire. And the extensive influences of melodrama are demonstrated through a wide-ranging assessment of its ongoing and sometimes unexpected expressions - in psychoanalysis, in other art forms (the novel, film, television, musical theatre), and in popular culture generally - from the nineteenth to the twenty-first century.