Through the first decades of the twentieth century, Rutgers College became Rutgers University. For most of that time, the school was underenrolled and short on funds, and it was only the labors of the President, Trustees, and faculty that allowed it to survive and grow. Rutgers needed to find a formula that worked, and in the process, ended up moving in many directions at once.

By 1918, America was trying to get back on its feet after losing more than a hundred thousand soldiers in World War I. A flu epidemic had hit the country hard and caused another six hundred thousand deaths. Life in America seemed fragile.

Colleges suffered from the national crises. Veterans seemed in no hurry to return to or begin school, and a faculty proposal to make Rutgers coeducational was ignored by the Trustees. As the number of enrollments dwindled, Rutgers President William H. S. Demarest was having difficulty keeping Rutgers College the traditional liberal arts institution it had been. However, other exciting changes were in process. The Agricultural and Scientific College (later Cook College), supported by state and federal land-grant funds, was thriving. The New Jersey College for Women (later Douglass College) was founded in 1917, and also grew quickly. 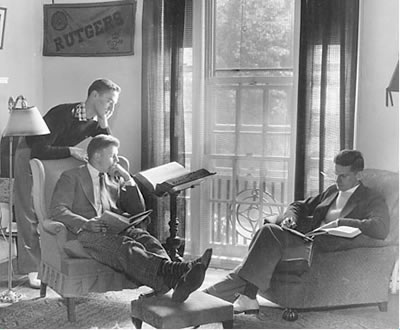 Under a complex scheme of organization, both of these new colleges were supervised by the Rutgers College President and Trustees. In 1924, the Trustees decided to recognize this new status by officially, but quietly, changing the name to Rutgers University. Ironically, that was the same year Demarest, recovering from an illness and sensing that his particular talents were no longer needed, decided to retire after eighteen years. As the first graduate of Rutgers to serve in the post, Demarest had been the most successful President to date.

Rutgers College, the classical liberal arts school, still existed as a separate college, but was having a difficult time enrolling students. Admissions standards were lowered, and the study of ancient Greek was eliminated as a graduation requirement for the first time since the school was founded. To attract more applicants, Rutgers followed the lead of Harvard and other elite colleges, and began to offer new courses of study and new electives.

Charles Huntington Whitman, the Chair of Rutgers English since 1911, saw these years of change as an opportunity, and shaped the English curriculum to reflect the transformation of Rutgers College. Modeling the Department on those of other successful universities, he dropped antiquated requirements and increased modern offerings. For example, the gentlemen’s courses in “Rhetoric” disappeared completely, and were replaced by practical courses in composition. Composition eventually became a requirement for students studying other fields like agriculture or engineering, reflecting the belief that written expression was necessary for any well-rounded education.

At Whitman’s insistence, more English electives were offered, and more instructors were hired in order to decrease class sizes. A Chair and professors were hired for a separate Department at the women’s college, relieving the strain on the Rutgers College English faculty. Journalism was offered through the English Department for the first time in 1926, but journalism studies quickly separated into its own department, as it did at many other universities.

As journalism was on its way out, an important new program was coming in. Graduate studies in English appeared for the first time in 1928. Three courses were offered: Old English, Middle English, and a course on Spenser, all taught by Whitman. By 1933, the Department was offering a formal Masters degree for completing coursework and an examination. The number of classes had doubled, with courses on literary criticism, on American literature, and an advanced seminar called “Transcendental Revolt in New England.” The graduate curriculum soon grew to incorporate courses on John Milton, seventeenth-century literature, and Renaissance literature, though Rutgers did not yet offer a Ph.D. in English.

By stretching its mission to encompass a wide range of activities, from composition requirements for non-majors to advanced graduate study in literature, Rutgers English maintained its roots in the college structure while working to serve the new research goals of a large university.

Whitman’s sudden death in 1938 created a chasm. He had led the English Department for almost three decades, and had been one of the most popular professors at the University. Rutgers English might easily have foundered without his vision. But in 1940, a well-known Milton scholar from Queens College named J. Milton French was hired to be the Chair. As World War II began, he would go beyond the duties of his office, helping President Robert C. Clothier plan to reshape the University after the war.