This compelling and imaginative historical novel takes off from a 19th-century incident that gave birth to the term "Jim Crow": a white actor named Tom Rice gained fame performing in blackface a dance he learned from a slave named Jim Crow. The fiction follows Jim Crow's son, Jim Too, on his travels as a dancer with Rice's minstrel show before the Civil War. After the war, Jim Too hooks up with the liberated Featherstone sisters, who create their own show, featuring a mute Indian woman named Which-Away and a white dancer nicknamed Sweet Knees who passes for black. Racist violence eventually befalls the troupe. Professor Brown's ( Tragic Magic ) story is simple, and he excels at using blunt language powerfully, as when he describes Jim Too being delivered to Rice "tied across a horse like a bedroll"; he has a gentle way of conveying historical events without announcing them. Dancing serves as a metaphor for ideas and emotions in this work. When Rice dies, Jim Too performs a jig on his coffin, and one day in New York City in the midst of the draft riots Jim Too marvels at seeing "a dancer who could make people believe he was sinking while standing on solid ground"--then realizes the man is being lynched. 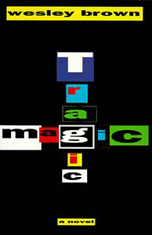