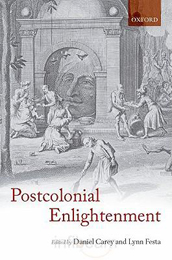 Over the last thirty years, postcolonial critiques of European imperial practices have transformed our understanding of colonial ideology, resistance, and cultural contact. The Enlightenment has played a complex but often unacknowledged role in this discussion, alternately reviled and venerated as the harbinger of colonial dominion and avatar of liberation, as target and shield, as shadow and light. This volume brings together two arenas—eighteenth century studies and postcolonial theory—in order to interrogate the role and reputation of Enlightenment in the context of early European colonial ambitions and postcolonial interrogations of Western imperial aspirations. With essays by leading scholars in the field, Postcolonial Enlightenment addresses issues central not only to literature and philosophy, but also to natural history, religion, law, and the emerging sciences of man. The contributors situate a range of writers—from Hobbes and Herder, Behn and Burke, to Defoe and Diderot—in relation both to eighteenth century colonial practices and to key concepts within current postcolonial theory concerning race, globalization, human rights, sovereignty, and national and personal identity. By enlarging the temporal and geographic framework through which we read, the essays in this volume open up alternate genealogies for categories, events and ideas central to the emergence of global modernity. Contributors include: Siraj Ahmed, Srinivas Aravamudan, Daniel Carey, Lynn Festa, Doris Garraway, Suvir Kaul, David Lloyd, Felicity Nussbaum, Karen O'Brien, and Sven Trakulhun.