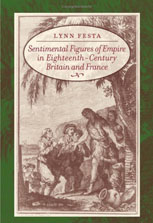 In this ambitious and original study, Professor Festa examines how and why sentimental fiction became one of the primary ways of representing British and French relations with colonial populations in the eighteenth century. Drawing from novels, poetry, travel narratives, commerce manuals, and philosophical writings, Professor Festa shows how sentimentality shaped communal and personal assertions of identity in an age of empire. Read in isolation, sentimental texts can be made to tell a simple story about the emergence of the modern psychological self. Placed in conversation with empire, however, sentimentality invites both psychological and cultural readings of the encounter between self and other.

Sentimental texts, Professor Festa claims, enabled readers to create powerful imagined relations to distant people; yet, these emotional bonds simultaneously threatened the boundaries between self and other, civilized and savage, colonizer and colonized. Professor Festa argues that sentimental tropes and figures allowed readers to feel for others, while maintaining the particularity of the individual self. Sentimental identification thus operated as a form of differentiation as well as consolidation. Professor Festa contends that global reach increasingly outstripped imaginative grasp during this era. Sentimentality became an important tool for writers on empire, allowing conquest to be portrayed as commerce, and scenes of violence and exploitation to be converted into displays of benevolence and pity. Above all, sentimental texts used emotion as an important form of social and cultural distinction, as the attribution of sentience and feeling helped to define who would be recognized as human.