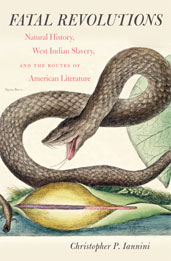 Drawing on letters, illustrations, engravings, and neglected manuscripts, Christopher Iannini connects two dramatic transformations in the eighteenth-century Atlantic world--the emergence and growth of the Caribbean plantation system and the rise of natural science. Iannini argues that these transformations were not only deeply interconnected, but that together they established conditions fundamental to the development of a distinctive literary culture in the early Americas. In fact, eighteenth-century natural history as a literary genre largely took its shape from its practice in the Caribbean, an oft-studied region that was a prime source of wealth for all of Europe and the Americas.

The formal evolution of colonial prose narrative, Ianinni argues, was contingent upon the emergence of natural history writing, which itself emerged necessarily from within the context of Atlantic slavery and the production of tropical commodities. As he reestablishes the history of cultural exchange between the Caribbean and North America, Ianinni recovers the importance of the West Indies in the formation of American literary and intellectual culture as well as its place in assessing the moral implications of colonial slavery.