Taking Liberties with the Author 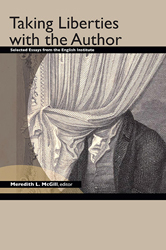 In addition to the editor's introduction, which discusses contemporary literary criticism’s vexed attachment to the idea of the author as a means of organizing knowledge about literature, Taking Liberties with the Author: Selected Essays from the English Institute features five essays that explore the place of the author in literary discourse.  Essays by Rita Copeland, Ian Duncan, Adela Pinch, Jean Howard, and Jerome Christensen range from an analysis of authorial disavowal in ancient and medieval rhetorical traditions to an account of corporate authorship as articulated in the Disney-Pixar merger.  Published as an ACLS Humanities e-book. 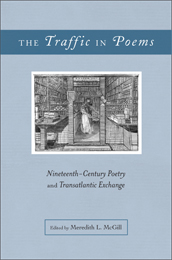 The transatlantic crossing of people and goods shaped nineteenth-century poetry in surprising ways that cannot be fully understood through the study of separate national literary traditions. American and British poetic cultures were bound by fascination, envy, influence, rivalry, recognition, and piracy, as well as by mutual fantasies about and competition over the Caribbean.

Drawing on examples such as Felicia Hemans's elaboration of the foundational American myth of Plymouth Rock, Emma Lazarus's ambivalent welcome of Europe's cast-off populations, black abolitionist Mary Webb's European performances of Hiawatha, and American reprints of Robert Browning and George Meredith, the eleven essays in this book focus on poetic depictions of exile, slavery, immigration, and citizenship and explore the often asymmetrical traffic between British and American poetic cultures.

American Literature and the Culture of Reprinting, 1834-1853 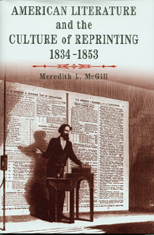 The antebellum period has long been identified with the belated emergence of a truly national literature. And yet, as Professor Meredith L. McGill argues in this book, a mass market for books during this period was built and sustained through what we would call rampant literary piracy: a national literature developed not despite but because of the systematic copying of foreign works. Restoring a political dimension to accounts of the economic grounds of antebellum literature, Professor McGill unfolds the legal arguments and political struggles that produced an American culture of reprinting and held it in place for two crucial decades.

In this culture of reprinting, the circulation of print outstripped authorial and editorial control. Professor McGill examines the workings of literary culture within this market, shifting her gaze from first and authorized editions to reprints and piracies, from the form of the book to the intersection of book and periodical publishing, and from a national literature to an internally divided and transatlantic literary marketplace. Through readings of the works of Dickens, Poe, and Hawthorne, Professor McGill seeks both to analyze how changes in the conditions of publication made themselves felt at the level of the literary form and to take the measure of what was lost as literary markets became centralized and literary culture became stratified in the early 1850s. American Literature and the Culture of Reprinting delineates a distinctive literary culture that was regional in articulation and transnational in scope, while questioning the grounds of the startlingly recent but nonetheless powerful equation of the national interest with the extension of the authors rights.