Narrative, Authority, and Power: The Medieval Exemplum and the Chaucerian Tradition Cambridge 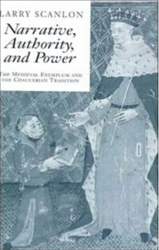 Until now, little attention has been paid to the political and ideological significance of the exemplum, a brief narrative form used to illustrate a moral. Through a study of four major works in the Chaucerian tradition (The Canterbury Tales, John Gower’s Confessio Amantis, Thomas Hoccleve’s Regement of Princes, and Lydgate’s Fall of Princes), Scanlon redefines the exemplum as a ‘narrative enactment of cultural authority’. He traces its development through the two strands of the medieval Latin tradition which the Chaucerians appropriate: the sermon exemplum, and the public exemplum of the Mirrors of Princes. In so doing, he reveals how Chaucer and his successors used these two forms of exemplum to explore the differences between clerical authority and lay power, and to establish the moral and cultural authority of their emergent vernacular tradition. 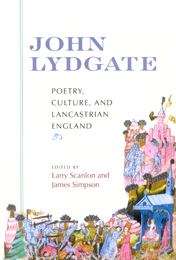 Essays in this volume argue for a powerful reassessment of John Lydgate's poetic projects. The preeminent English poet of his own century, Lydgate (ca. 1370-1449) addressed the historical challenges of war with France, looming civil war in England, and new theological forces in the vernacular. He wrote for household, parish, city, monastery, church, and state. Although an official poet of sorts-perhaps the first major official poet in the English poetic tradition-he was not by any means a merely celebratory or sycophantic writer. Instead, he drew on his authority both as poet and as monastic historian to shape a challenging literary space and to underline the treacherousness of history. Despite his exceptional cultural significance, Lydgate has, for different reasons, been marginalized by many literary historical movements since the sixteenth century. John Lydgate: Poetry, Culture, and Lancastrian England is energized by the challenge of a substantial oeuvre in need of reevaluation. Each essay makes a decisive contribution to an aspect of Lydgate's work and opens fresh perspectives for further investigation.

Contributors write about Lydgate from a variety of critical perspectives and emphasize the diversity of the poet's writings beyond the city-state tragedies of Troy and Thebes. Genres discussed include beast fable, mumming, hagiography, devotional poetry, and civic pageant. The essays also reassess crucial themes in the field of Lydgate studies, including Lydgate's unofficial laureateship, his relations to his patrons, his syntax, and his relationship to Chaucer.