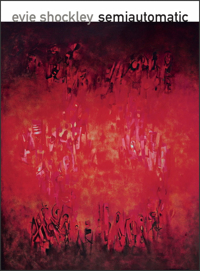 Art can’t shield our bodies or stabilize the earth’s climate, but Evie Shockley’s semiautomatic insists that it can feed the spirit and reawaken the imagination. The volume responds primarily to the twenty-first century’s inescapable evidence of the terms of black life—not so much new as newly visible. The poems trace a whole web of connections between the kinds of violence that affect people across the racial, ethnic, gender, class, sexual, national, and linguistic boundaries that do and do not divide us. How do we protect our humanity, our ability to feel deeply and think freely, in the face of a seemingly endless onslaught of physical, social, and environmental abuses? Where do we find language to describe, process, and check the attacks and injuries we see and suffer? What actions can break us out of the soul-numbing cycle of emotions, moving through outrage, mourning, and despair, again and again? In poems that span fragment to narrative and quiz to constraint, from procedure to prose and sequence to song, semiautomatic culls past and present for guides to a hoped-for future.