The Emergence of the Modern Museum: An Anthology of Nineteenth-Century Sources 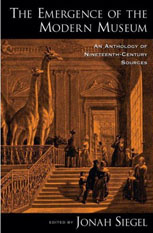 In 1820 less than a handful of museums existed on the British Isles, and both their form and function were far from what a visitor today would expect. By the beginning of the first world war, not only had over 400 museums been founded in Great Britain, but their place in culture was recognizably close and often identical to the modern one - whether considered in terms of content, forms of display, or modes of access. Although there has never been a single simple and uncontested amount of the character and function of the museum, it is to this period of inception that we may turn for the most urgent and compelling debates as to the nature of institutions that were set up with such effort and expense in England and all over the world. The goal of this anthology is to allow the reader access to primary sources indicative of the history and development of the museum in the nineteenth century, which is to say, at the moment the modern concept took institutional shape in response to the varied social and cultural debates. 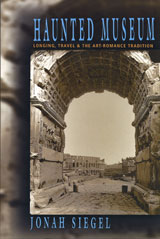 For centuries, southern Europe, and Italy in particular, has offered writers far more than an evocative setting for important works of literature. The voyage south has been an integral part of the imagination of inspiration itself. Haunted Museum is a groundbreaking in-depth look at fantasies of Italy from the late eighteenth to the early twentieth centuries, focusing on a literary tradition Professor Jonah Siegel terms the "art romance," the fantastic voyage south understood as the register of an ambivalent desire at once for art and for a heightened experience of reality.

Professor Siegel argues that Italy's allure derives not only from its celebrated promise of unique natural beauty and prized antiquities, but from the opportunity it offers writers to place themselves in relation to a web of prior accounts of travel to the native land of genius. Beginning with Goethe as the founding figure of the tradition, Haunted Museum moves from a rich reframing of literature from the first half of the nineteenth century—including new readings of works by Byron, de Staël, Barrett Browning, and others—to an ambitious examination of Henry James's well-known engagement with Europe, newly understood as a response to this important literary legacy. Readings of works by Freud, Forster, Mann, and Proust demonstrate the longevity of the tradition of looking to Italy for the representation of desires as impossible to satisfy as they are to deny.

Desire and Excess: The Nineteenth-Century Culture of Art

In this fascinating look at the creative power of institutions, Professor Jonah Siegel explores the rise of the modern idea of the artist in the nineteenth century, a period that also witnessed the emergence of the museum and the professional critic. Treating these developments as interrelated, he analyzes both visual material and literary texts to portray a culture in which art came to be thought of in powerful new ways. Ultimately, he shows that artistic controversies commonly associated with the self-consciously radical movements of modernism and postmodernism have their roots in a dynamic era unfairly characterized as staid, self-satisfied, and stable.

The nineteenth century has been called the Age of the Museum, and yet critics, art theorists, and poets during this period grappled with the question of whether the proliferation of museums might lead to the death of Art itself. Did the assembly and display of works of art help the viewer to understand them or did it numb the senses? How was the contemporary artist to respond to the vast storehouses of art from disparate nations and periods that came to proliferate in this era?

Professor Siegel presents a lively discussion of the shock experienced by neoclassical artists troubled by remains of antiquity that were trivial or even obscene, as well as the anxious aesthetic reveries of nineteenth-century art lovers overwhelmed by the quantity of objects quickly crowding museums and exhibition halls. In so doing, he illuminates the fruitful crises provoked when the longing for admired art is suddenly satisfied. Drawing upon neoclassical art and theory, biographies of early nineteenth-century writers including Keats and Scott, and the writings of art critics such as Hazlitt, Ruskin, and Wilde, this book reproduces a cultural matrix that brings to life the artistic passions and anxieties of an entire era.