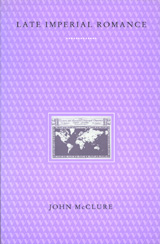 Professor John McClure charts the course of decline, first in the works of Joseph Conrad, chronicler of high imperialism's contradictions, then in the post-war fictions of Joan Didion, Robert Stone and Thomas Pynchon. He maps the complex field of romantic ideology where one can at once excoriate imperialist adventures and yet savor their taste.

Kipling and Conrad: The Colonial Fiction 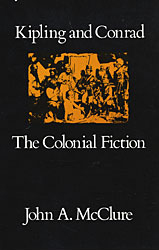 In this skillfully written essay on the fiction of imperialism, Professor John McClure portrays the colonialist--his nature, aspirations, and frustrations--as perceived by Kipling and Conrad. And he relates these perceptions to the world and experiences of both writers.

In the stories of the 1880s, McClure shows, Kipling focuses with bitter sympathy on "the white man's burden" in India, the strains produced by early exile, ignorance of India, and the interference of liberal bureaucrats in the business of rule. Later works, including The Jungle Book and Kim, present proposals for imperial education intended to eliminate these strains.

Conrad also explores the strains of colonial life, but from a perspective antithetical in many respects to Kipling's. In the Lingard novels and Lord Jim he challenges the imperial image of the colonialist as a wise, benign father protecting his savage dependents. The pessimistic assessment of the colonialist's motives and achievements developed in these works finds full expression, McClure suggests, in Heart of Darkness. And in Nostromo Conrad explores the human dimensions of large-scale capitalist intervention in the colonial world,, finding once again no cause to celebrate imperialism.

John McClure's interpretation is forceful but ever attuned to the complexities of the texts discussed.

Partial Faiths: Postsecular Fiction in the Age of Pynchon and Morrison 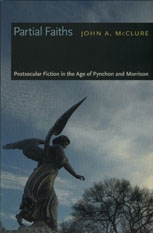 Spiritual conversions figure heavily in such novels as Thomas Pynchon's Vineland, Toni Morrison's Paradise, and Louise Erdrich's Love Medicine. What connects such varied works is that the characters in them who are converts are disenchanted with secularism yet apprehensive of dogmatic religiosity. Partial Faiths is the first study to identify a body of contemporary fiction in such terms, take the measure of its structures and strategies, and evaluate its contribution to public discourse on religion's place in postmodern life.